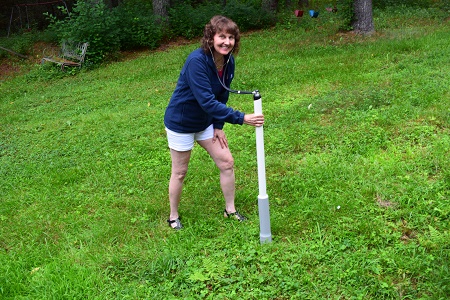 Our septic tank at our camp on Sebec Lake in Maine had not been pumped out in about 24 years. It's supposed to be pumped out at least every ten years. It's a beautiful location on a slight hill near the end of a peninsula. We hired someone with an excavator to find the tank, but after a few hours he gave up and couldn't find it. About 6 months later, I bought the baby backhoe described elsewhere at this site and began digging. No luck. The location of this septic tank was a mystery and it appeared it was going to stay that way. So I went online and found an article about a ground stethoscope. It was only one article and I wondered why there weren't more people posting info about this approach. So I was skeptical. Well, my wife is a doctor, and she is good with a stethoscope. She had a spare one and I had some PVC pipe. Why not? I modified the design slightly. The guy used a paper cup and a stethoscope he bought at a hardware store. I used a medical stethoscope which I simply taped onto a PVC pipe. I expanded the other end of the tube into some 3" electrical conduit I had to collect more sound vibrations.

The world of sound is amazing. When a boat went by on the lake, I could hear low frequency sound of the boat motor through the ground with this thing. I wondered how low-frequency sounds like that affected the fish and birds in the lake. In any case, I place a high pitch buzzer in the sewar pipe inside the camp and went out listening. Apparently high pitch sound does not travel well through the ground. The article suggested running a lot of water through the pipes with the idea that you could hear the water dropping into the tank. No luck there. I remember reading about another guy tapping on the pipes. That's when I recruited the good doctor. I tapped on the pipe while she went around listening. She came back and told me I was tapping too loud. She could hear it through the camp's basement wall without the stethoscope. "Tap lightly," she said. I did what the doctor ordered. Within a couple minutes she came back in with a big smile. "I think I found it." "The trick is to not to listen just for the tapping, but to listen for an echo," she said. Apparently the tapping noise echos nicely inside the empty space of the concrete septic tank. She told me the exact point where the echo was the loudest. I dug there with the baby backhoe and 24 inches down I hit concrete, that is the top of our septic tank. We had the septic tank pumped out a few days later. Yeah, I can finally cross that off my to-do list.