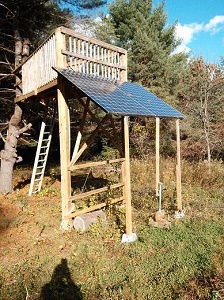 There is only one spot that gets a lot of sun on our property in Orono Maine. Unfortunately it's not near our house. It is however, a good location for a treehouse. Now it's not uncommon for Dads to build treehouses for their sons and daughters, but I am no ordinary Dad. If I am going to build a treehouse, it's going to be special. How about one that has electricity powered by the sun, and while it's not in use, let's use some of it to power our house, and if we have any extra, let's put it back on the grid to power our neighbors' houses. Now that is cool. How many daughters can say I have a solar powered tree house that is good for the environment. My second daughter, by the way, an A student with multiple honor awards, now in grad school and with a work ethic that easily doubles mine, (Yes, I'm proud of her) used to bring her friends to the solar treehouse at night for scary treehouse parties. I've added more panels to the top of this treehouse since the above picture was taken, upping the rating from 1 kW to 1.7 kW. It's not a lot but it's enough to see the power meter spin backwards on sunny days. To get the most out of the panels, I made the panels adjustable. Notice the jack on the middle post supporting the panels. By turning a crank I can change the angle of the solar panels. I have a similar adjustment for the top panels. The panels can be adjusted to about 45 degrees for the winter months when the sun is lowest. I increase that angle in the summer when the sun is highest. No design is perfect and that includes my designs. I encourage people to improve upon my designs. One problem with a solar powered treehouse, or any treehouse for that matter, is that trees move when the wind blows. The joints in this treehouse had to be designed to move without breaking. There are large hinge-type bolts that connect the beams to the tree and to the two front posts of the platform. The top of the solar panels frames are also on hinges. Despite numerous windstorms over the years, this grid-tied solar tree house has served us well over the years saving us hundreds of dollars every year in electric bills. The solar tree house has now paid for itself. With no maintenance cost, we're now making money!